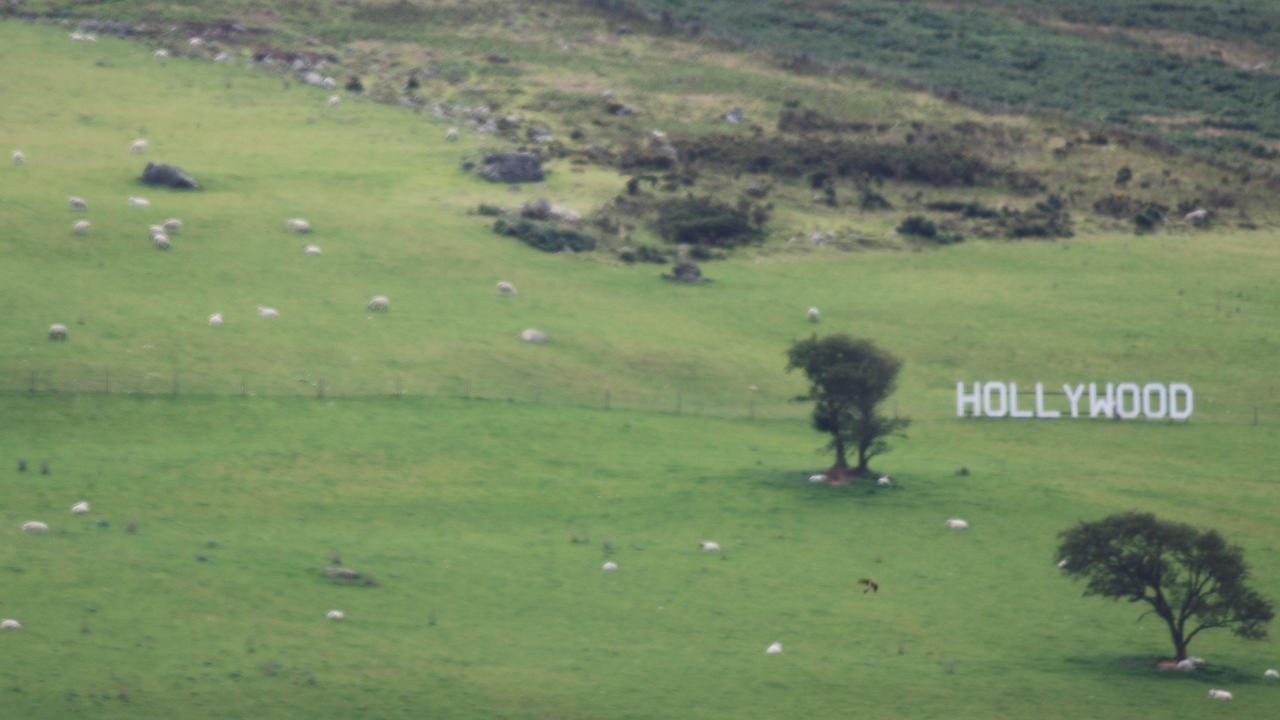 This morning we headed to Hollywood. Big white letters up on the side of the hill. But wait, there's sheep grazing around the letters. No, this wasn't Hollywood, California, but rather Hollywood, Ireland. There is an amazing little local fair held in Hollywood every year, where many locals dress in period costumes of the early to mid-1900s. There are antique cars, steam tractors, horse-drawn buggies, old time Irish music and it feels as if you've gone back in time. True to form, there is also a sheepdog trial.

Mary Lou and I were some of the earlier ones to arrive (around noon, very laid back around here). We had to jump a barb wire fence after throwing our dogs over it to get to the path that took us to the field. Through a cemetery, over a stone bridge crossing a small stream, walk through another small stream, you get the idea. The field was small, but the sheep were set out of sight behind a [berm]. You couldn't see the sheep and the dog had to get directed out through a gap in the brush. As a matter of fact, you couldn't see anything, it was pretty much a blind fetch until your dog hopefully brought the sheep on the small path through the brush. On top of it, the sheep were extremely touchy and they could see the exhaust. The spectators were on the field everywhere. If you sent right, your dog ran past people, who needs a fence? I wondered about the liability of it all, in North America you'd be signing waivers until the cows came home.

It was first come first served, so I walked up to take my try about the fourth go but a lady "needed to make the boat", so she went ahead of me.

I sent Craig right, and he went out beautifully, and didn't need a redirect. He'd seen a few previous runs and worked out where the sheep were. He overshot a bit and the only reason I knew was I had a glance of sheep heads going sideways (it's a good job I'm tall). I whistled him over and he elected to bring the sheep through the scrub instead of on the sheep trod, but oh well, by the time you saw them, it was time to worry about the fetch panel. We made the panel but turning the post was tough with the exhaust and all the spectators. We got it done, but (I'll blame it on jet lag, it's as good an excuse as any) I was shy on both my drive panels. Got the shed alright, but none of these sheep were fond of the pen, which by the way, had no gate or rope on it and was the smallest thing I'd ever seen. Is there a time limit here? Which side of the pen do you stand on? Does anyone care?

I finally managed to slide my sheep into the pen with some excitement here and there. Is this when I head to the beer tent?

Mary Lou and Dyna went shortly after, and they looked great. Dyna found her sheep with ease, walked them beautifully around the course, except for a little bobble at the cross drive panel where the spectators were so close they were almost blocking the panel. The shed was a bit tricky and the pen was relatively straight forward. Several people stopped Mary Lou to compliment her on Dyna and their run. The trial was to carry on all day, and Denis Birchall had invited us to go watch a demo he was doing so we left straight away instead of waiting for our scores.

However, we lost sight of the person we were following to the demo and got lost. We stopped in at a pub for lunch instead, and tried to rip open the leather bound squares that were on the table in front of us that we assumed were leather-bound menus. Turned out they were place mats and the lady at the table beside us could barely contain her laughter as she watched us struggle. We decided to try elsewhere as we were in a search for a wireless connection. The server suggested we try the Hollywood Inn. Sounds familiar...

We drove in circles for awhile and ended back at the fair. We decided to go back in and look around as what we had seen looked pretty spectacular. The fair had basically taken over the town and it was closed to cars so we went back to our original parking spot in a field and went in the same way (over the barbed wire, etc). As we walked through the fair, we came upon the Hollywood Inn and Pub. Duh. (No wireless however.) We decided to try an Irish Guinness. Everyone says you have to try Guinness beer in Ireland. As we were having a sip, a hornet landed on Mary Lou and stung her. She yelled and leapt up, throwing her beer (accidentally) all over herself, me, the dogs, and a passing lady in a dress. Oops. Sorry about that.

The dogs handled the commotion with remarkable steadiness as we forced our way through crowds of people, horses, buggies and steam engines with children reaching out to pet them randomly. Jet lag was setting in on all of us and we decided to call it a day, after many laughs and adventures.