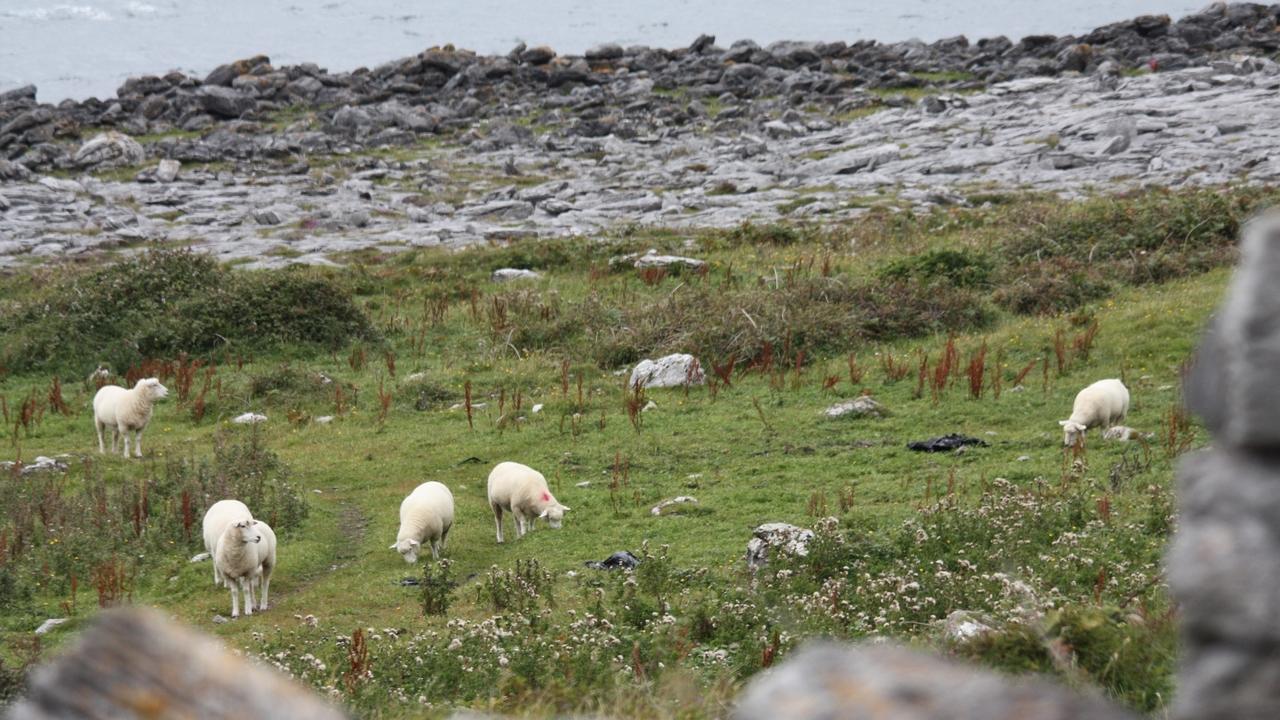 I can't believe how much we are learning... About sheep, about dogs, and about handling. Our dogs are flanking better, shedding better, going back better. Denis is truly brilliant with the dogs. It is incredible to watch how fast he can train a dog. The way he gets into their mind is amazing.

We decided to give our dogs a day off and go explore Dublin. After a bit of shopping, we went (where else?) to the Guinness Storehouse. Arthur Guinness was a visionary who signed a 9000 year lease for the land and water source for the famous beer. There is a lesson to be learned in his faith and belief in making Guinness beer the success it is today.

We managed to turn the wrong way out of the tourist attraction and ended up in a bad part of Dublin. Upon asking for directions, we were warned to watch our purses while walking back towards the public transit. I guess our shopping bags were a bit of a giveaway that we were tourists. After a stressful but uneventful walk to the transit, we safely boarded the light rail and headed out of the city.

When we got back, we decided to take the dogs for a walk before dinner, as they hadn't come with us on our Dublin excursion. Since we hadn't yet explored Dun Lavin, the nearby village, we decided to walk the dogs there. As we got into town to walk the dogs, we ended up talking to a woman (who spoke very fast and with a strong accent) on the street who suggested we go see Rat Salad. What? Rat Salad. We couldn't quite make out what exactly it was she was saying, but she said it was only a couple of miles up the road and it was beautiful. We thought it was probably the name of a town, so we hopped in the car again and off we went. Beyond every curve or cluster of homes that came into view, we expected to come upon a village, but none appeared. Suddenly, we passed a golf course with the name Rathsallagh. Perhaps the golf course was named after the town? No village came into sight, but a sign for the club house appeared soon after and Mary Lou, who was driving decided to chance it.

We drove up a spectacular driveway and came to a rather private looking members' clubhouse. I drew the short straw to ask for directions. Since many high end golf courses don't allow jeans and street shoes (especially shoes that may be sporting some sheep substance), I was a bit concerned about being tossed out on my duff. I walked in trying to look like I belonged there, at least hoping to get past the door. I had on a vest that looked equestrian so maybe I could pass for a rich Canadian horse person? Not likely. I ran into an Irish gentleman and told him I was looking for Rat Salad (I tried to slur it a bit as I was pretty sure that wasn't the actual name and didn't want to offend anyone). He said, with a bit of admiration, "Are you staying at the house then?" I made a non-committal kind of a noise, not really sure what "the house" was. He pointed to a nearby lane way..."Just follow that lane, it will take you there".

Back at the car, we decided to to attempt the lane, signed Rathsallagh House. It ended up being a service road that took us straight through the middle of a gorgeous golf course, with spectacular views as the light started to fade. We waved as we passed the last golfers of the day, getting a view of the course I'm sure few people get to enjoy (or are allowed to). We couldn't turn around without driving on the turf, which we knew would be a BIG faux pas so on we went. We ended up in the staff parking lot. Obviously, the fellow back at the club house decided I wasn't cut out to be a guest. We got out of the car, praying the dogs wouldn't start barking and cause us to be arrested for trespassing. We didn't know how to get back without cutting through the course again and didn't want to press our luck.

There was a very luxurious house that appeared to be housing a number of guests, so we went over to the [Reception]. There were guests eating at tables surrounded by beautiful equine memorabilia.

It turned out that Rathsallagh had been converted from Queen Anne stables in 1798 into a fabulous golf course, luxurious guest house and restaurant. A very classy looking lady met us as we came in and asked if we were staying with them. I said no, but that they had been recommended to us. She led Mary Lou and me to a table near the bar. We soon met Joe O'Flynn (owner of Rathsallagh, along with his wife Kay, who had greeted us earlier) who was a huge dog lover and sporting man and over a glass of wine he told us many colourful stories that had us laughing heartily. It is amazing how dogs bring people together.

After a pleasant visit by the fire, Mary Lou decided to run to the very posh washroom (known as the "toilet" in the UK and Ireland, but we still can't bring ourselves to say it). After some time had passed, she finally reappeared. She was looking a bit sheepish (pardon the pun) and trying not to laugh at the same time...I knew something was up. As we walked out, Mary Lou whispered to me that she was so embarrassed. She had gone to pull a piece of toilet paper out of the holder before she had a seat, and the entire unit had come off the wall and landed in the toilet! She had been trying to dry everything off and so had left it on a nearby ledge to dry out. Trust us to have a grand exit, nothing is ever normal with us.

We made it back to the Birchall's just before the search party went out... I think they've all come to realize we need a bit of minding as adventures tend to follow us!