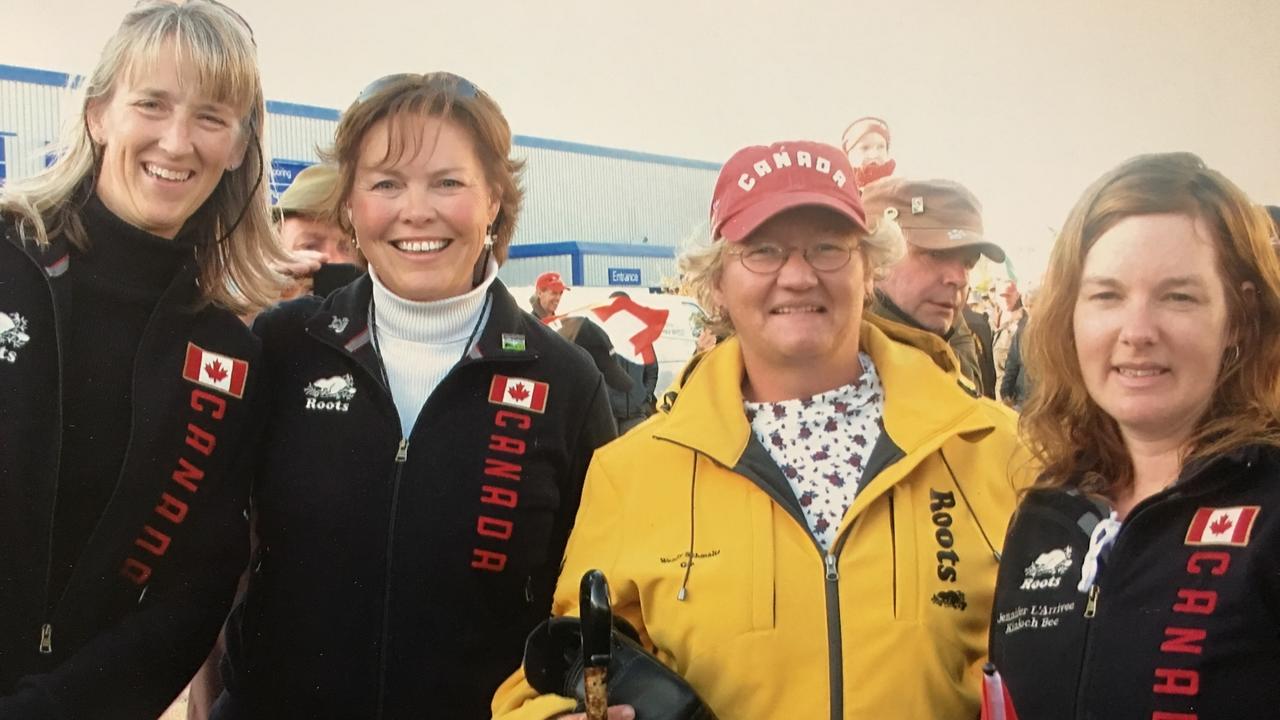 The day before the trial started, there was a big parade in the city of Penrith. Mary Lou and I elected to drive to the parade route instead of taking the bus as Dyna was in season.

However, we had no idea where the parade route started. By the time we found parking, we were running late, and since we had the Canadian flag, it was kind of important for us to be in the parade.

We saw a street lined with people, and deduced that was probably the parade route (duh). We ran to the road, but then weren't sure whether to run up the street or down the street. We decided to run in the direction everyone was looking on the assumption that they knew more about it than we did! People started cheering as we ran by. Handlers from several other countries who were in the same boat started to follow us on the mistaken idea that we knew where we were going. After sprinting through half the town we found the throng of handlers milling about waiting to start the parade.

It was quite a spectacular sight, led by the Earl of Lonsdale in a horse drawn carriage with all the countries and their colours following behind. We were surprised to see a lot of Canadian support in the crowd cheering, including Fiona Robertson who decided to come on the spur of the moment, as well as the US supporters.

As Mary Lou still wasn't 100%, we elected to leave after the parade.

Mary Lou ran late the following day, and had a good run with Dyna in the tricky field 3, which had several blind spots and a very rough, rocky area right on the drive line. Mary Lou and Dyna finished the course but a ewe that just wouldn't stay with the other four spoiled their chances. Although Mary Lou and Dyna managed her brilliantly, a few small wobbles or a bad sheep was all it took to knock you out of contention, as field 3 was considered the toughest field to qualify on Thursday. There were something like four Supreme International and three Continental Champions, plus multiple National winners.

Early the next morning, I ran Craig on the very difficult field 1. The first run was absent which I wasn't aware of, so there was only one run before mine and Craig didn't get much chance to see the sheep set.

I sent left because the right hand was into the huge field and many dogs got lost the day before. The left however was blind with several points that brought the dogs in and Craig needed a few redirects as he doesn't yet have that kind of experience. The run went well to the pen, which took some time and cost us getting to the single and really hurt our score, but he handled the sheep as well as any dog on the fetch and drive so I was very pleased with Craig.

With our runs done we became spectators for the rest of the weekend of brilliant running. The main activity has become staying out of the mud!

The level of difficulty on the final day was very high. Our good friend Denis Birchall made it to the final day, but it was another Irishman, James McGee and Becca who were crowned World Champions.

The Canadian team ran well, we were all proud of our dogs.

We headed our separate ways. Now for the homeward bound trip!